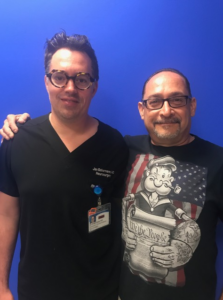 Fourteen years after being hit by a car in 1977, Sergio found himself in unrelenting pain from the lower back damage he sustained.

When epidural injections didn’t relieve his pain, a double lumbar fusion in 1995 kept him comfortable for almost a decade. Unilateral fusion surgery was performed in 2013 but the pain returned.

By 2015, Sergio was suffering from painful chronic nerve damage and diagnosed with failed back surgery syndrome. When a triple fusion was advised, Sergio investigated other options to avoid another surgery.

Sergio’s research led him to a successful HFX trial and sequential implant in 2016, which gave him 85% pain relief. Later that year, though, he was suffering from upper back and limb pain. A CT scan revealed cervical damage and degenerative disc disease. Surgery was again recommended but Sergio opted for a cervical HFX trial instead.

“I feel like a different person,” said Sergio, who now enjoys fishing and bike riding with his special needs son.

To see if HFX might be an option to consider, click the link. This will take you through a short questionnaire to determine if your condition is similar to those getting relief with HFX.